Introduction to the immune system

The mammalian immune system protects the body with multiple levels of defense. At the simplest level, the skin, mucous membranes and other epithelial tissues provide a physical barrier to attack by pathogens such as bacteria and viruses. 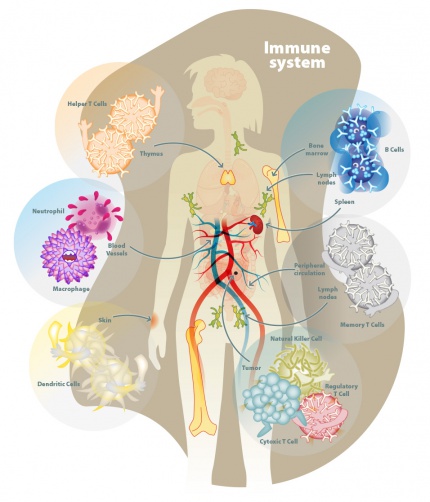 Once a pathogen is able to enter the body, it is met with an initial immune response mounted by the innate immune system. The innate immune system is an evolutionarily older defense strategy and has both cellular and non-cellular (humoral)components. The innate response is usually triggered when pathogens are identified by pattern recognition receptors, which recognize components that are conserved among broad groups of microorganisms, or when damaged, injured or stressed cells send out alarm signals, many of which (but not all) are recognized by the same pattern recognition receptors.

Induction of the innate immune response usually results in an inflammatory response. Inflammation is triggered by cytokine release from infected cells. These cause swelling, redness, fever and act as a chemoattractant, recruiting leukocytes such as neutrophils and macrophages to the site of infection. These cells kill the invading pathogen by phagocytosis and other mechanisms.

Natural Killer (NK) Cells are another cellular component of the innate immune system, but their role is not to directly attack pathogens. Instead, these cells provide continually survey the body, seeking out and destroying virally-infected or cancerous host cells.

Dendritic Cells are a type of phagocytic cell that acts as a messenger between the innate and adaptive immune systems. These cells are generally resident in peripheral tissues and provide immune surveillance. Upon phagocytosing a pathogen, they usually migrate to lymph nodes where they present the phagocytosed antigen to T Cells, resulting in T Cell activation and triggering an adaptive immune response.

The cells of the adaptive immune system are lymphocytes, a subset of leukocytes. B and T cells are the major types of lymphocytes and are involved in the humoral and cellular responses respectively.

T Cells play a number of roles in the adaptive immune system. T Cells expressing the CD4 glycoprotein on their surface are T Helper Cells and become activated when presented with pathogen-derived antigen by antigen presenting cells (APCs), such as dendritic cells. Once activated, T Helper cells provide “help” to activate B Cells. Activated T Helper cells also secrete various cytokines that further modulate and influence the activity of the immune system. Naïve CD4+ T Cells require two signals from the APC for complete activation. The first is recognition of the antigen, the second signal verifies that the antigen is derived from pathogen and not from a host cell protein. Different T Helper cell subsets secret different cytokines. Broadly speaking, T Helper cells can be divided into Th1 and Th2 classes. Th1 cells combat intracellular pathogens such as bacteria, while Th2 cells coordinate the immune response to extracellular parasites such as worms. Th1 and Th2 cells differ in the cytokines they secrete and also by their downstream effector cells.

Memory T Cells can be either CD4+ or CD8+ cells, are long-lived and can quickly expand to produce large numbers of effector cells when re-exposed to their cognate antigen. This provides the adaptive immune system with memory against previously encountered pathogens. There are several different subsets of Memory T Cells, each expressing their own set of cell surface markers.

Regulatory T Cells also express CD4, but their function is rather to down-regulate the activity of other immune cells, especially Cytotoxic T cells. This is important in preventing auto-immune disease but can have an adverse effect on cancer-fighting Cytotoxic T cells. Regulatory T Cells secrete a number of cytokines that suppress the activity of other immune cells.

B Cells are characterized by the presence of the B cell receptor (BCR) on their surface, a membrane bound IgG molecule that is able to bind a single, specific antigen. Once the B Cell has bound to its cognate antigen and has received a co-stimulatory signal from a T Helper Cell, “T Cell help” it will differentiate into a plasmablast that secretes large amounts of antibodies targeting the same antigen that bound to its BCR. The production of antibodies by plasma cells is the main function of the humoral component of the adaptive immune system. Antibodies bind to their cognate antigens on the surface of pathogens, either labelling them for phagocytosis by macrophages or by directly interfering with the pathogen’s activity. Some activated B cells will differentiate into longer lived plasma cells and memory B cells that contribute to immunological memory and the secondary immune response.

The connection between inflammation and cancer can be viewed as consisting of two pathways, an external pathway that is driven by external factors such as inflammatory disease, and an internal pathway, driven by genetic changes that promote tumour formation.

The tumour microenvironment is an integrated network of various cell types including cancer, stromal, vascular, and immune cells. Tumor cells display aberrant cell growth and signaling patterns to create an environment that favors evasion of the immune system.